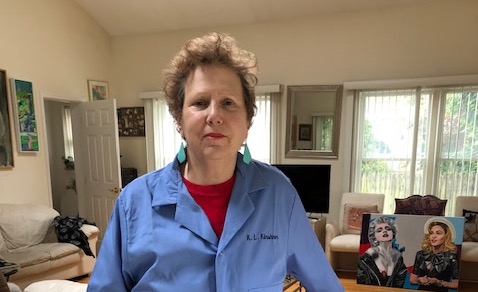 Critics have said Karen's art is original, complex, exciting and beautiful. She does not accept the status quo. Even though she has complete control over her technique, she keeps challenging herself with new possibilities. "If you seek powering a painting, you will find it in Kirshner."

Karen Lynne Kirshner is an award-winning abstract artist. Her awards include the Abstract Artist of the Year Award in the national juried competition, ACA (Art Comes Alive). The sponsors refer to it as the Academy Awards in Art and Design. She also received the Award of Excellence from the Suburban Art League, the Award of Excellence from the Art League of LI, and Best in Show/First Place for her vibrant and highly original painting "Faith" at the Biennial National League of American Pen Women National Juried Exhibition. The organization is the first and most prestigious national TRI-arts organization for women professionals in the USA. Her paintings have been exhibited in the National Headquarters' new gallery in Washington, DC.

Karen grew up in a creative household, exposed to art at a very young age through socializing with popular artists while watching her artistic mother, Betty B. Kirshner, bring her visions to life. Early on, Karen received awards for her intricate pen & ink compositions and had her first solo show through her high school cultural arts gifted program. She took numerous courses at the Art Students League of New York over the years and was soon showing in Greenwich Village with her mother.

Karen has a BA from Vassar College, where she minored in studio art. She spent time in England in a graduate art program and earned an MS and MBA with distinction. Karen is a member of many prestigious associations, including, but not limited to, the highly respected BJ Spoke Gallery in Huntington, NY, as well as the National Art League, Artists Alliance of East Hampton, National League of American Pen Women, the New York Society of Women Artists, and the National Association of Women Artists. Her paintings have appeared online and in catalogues and newspapers, and she has recently been the featured artist of the week and the Artist to Watch. Her paintings have been featured by the competitive Flaming Abstracts site as well as on Abstracts on Fire, and she has been a finalist in online competitions. Karen has shown at numerous galleries and her work is in private collections here and abroad. Her work is available on Artsy, 1stdibs, newyorkart.com and Ginnava.com.

In the northern light of her studio, with her easel where her mother's once stood, Karen is in a "zone" painting in a Zen-like state. There are no props. She begins with a blank canvas. Sometimes she starts with a shape. It happens, emerges and evolves with interactive decision-making on a conscious intuitive level.

Karen says, "I never know what I am going to do. I just know I want to gesso with black or white or clear gesso, and whether or not I want to start with a particular color." She has often compared her approach to solving jigsaw puzzles, the more complex, the more challenging.
Loading...